Xbox Live Gold is the premium version of the Xbox Live service on Xbox 360 and Xbox One. Xbox 360 and Xbox One consoles come with a free version of Xbox Live. The base service allows subscribers to play video games offline, download items from the Xbox Live Marketplace, chat with friends, and use popular entertainment apps like Netflix. It also provides access to applications such as Internet Explorer, Skype, and OneDrive.

In addition to all the core benefits, Xbox Live Gold subscribers also enjoy a few extras, including:

Deals with Gold are included in the Xbox Live Gold subscription and offer weekly discounts on select Xbox One and Xbox 360 games, add-ons and more in the Microsoft Store. Savings typically range from 50-75%. The Games with Gold program is included in the Xbox Live Gold subscription and offers free, select games each month. New Games with Gold games are available on Xbox One and Xbox360 on the first and sixteenth day of each month. Once added to your library, it can be played as long as you have an active Xbox Live Gold account. If you cancel, you will lose access to them. If you renew your subscription, the games will become replayable.

Type your 25 character code in the box.

Your gift card has been successfully activated. Have fun! 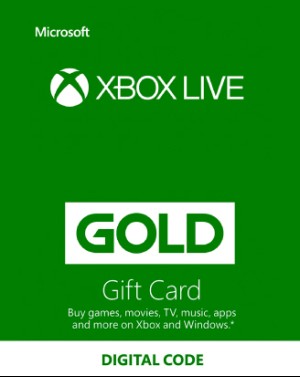